Mayor Fouts says: “Friday night I attended my first production at the Little Door Theater in Warren. The play was called “Emma” by Jane Austen. This was put on by local actors and acted and produced by Shannon Hurst. The theater is the former Peacock building and at one time the old Warren police station. It is very impressive and could easily pass for an off Broadway theater or even a counter part to the Gem Theater in Detroit. All in all, it could be the beginning of a renaissance for the south Warren Van Dyke 8 to 9 mile area. I can envision this area being somewhat like Ferndale or Royal Oak.” added the Mayor.

“I would urge all of you to attend one of the many theatrical performances on any Thursday, Friday, Saturday or Sunday. It’s a real treat just to be in a close, cozy theatrical setting. It is worth the small change for admission. It’s a treat that you will soon want to treat yourself again to! The theatre company features some of the most talented stage actors from Metro Detroit.”

Located at 21045 Van Dyke between 8 and 9 Mile Roads, the theatre has produced “Twelfth Night,” “The Seagull,” “She Kills Monsters,” “The Importance of Being Ernest” and “A Cabaret of Clichés.”

“It’s Warren’s first live, pre-professional theatre, “said owner Shannon Hurst.  “What makes Little Door Theatre unique is the fact that we highlight the actors more than the technical aspects of a show.  We don’t do distracting lighting or set designs because that can take away from the actual performance.  Our actors are truly amazing and their raw talent is blowing audiences away.”

Hurst, 24, is a life-long Warren resident.  She holds a bachelor in fine arts degree in acting from Wayne State University and says she always dreamed of owning her own theatre company.  She is thrilled she found a place in Warren.

“As soon as I walked into the building, I knew it was for me,” said Hurst.  “Warren needs a theatre like this.  I’m so happy to bring these productions to the city.”

You can find more infomration about the Little Door Theater on Facebook, the web at Littledoortheatre.com, or email Shannon Hurst at littledoortheatre@gmail.com.

Mayor Fouts said businesses like the Little Door Theatre, the new branch library, mini-police station and city hall (open in 2019) “proves that our city’s commitment to revitalizing older neighborhoods is a reality and attracting new businesses.” 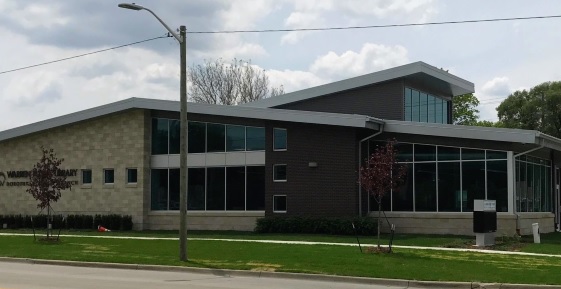