Mayor Fouts is saddened by the passing of a decorated hero of World War II.

Funeral service will be held on for a decorated hero of World War II and a POW James Green at the E.J. Mandziuk Funeral Home from in the City of Sterling Heights.  Funeral service will be followed by military honors. Interment will take place at a later date at Great Lakes National Cemetery in Holly, Michigan.

James L. Green served our country with great distinction, was deeply dedicated to our community, and our country. James Green was stationed at Tinian in the Mariana Islands.  James Green served time as a Japanese Prisoner of War.  James worked for and retired from the Fitzgerald Public School District. 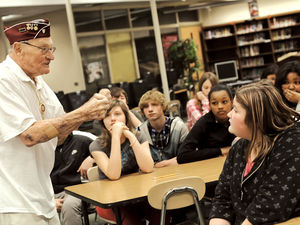 Mayor Fouts fondly remembers the speech that James L. Green gave during World War II ceremony several years ago, soon after the Mayor took office.  It was a great pleasure for the Mayor to be in the presence of such a great speaker who was able to communicate his experiences in such an effective and James L. Green is survived by his wife and five sons. The eldest of the Green sons is Jere Green, Warren’s Police Commissioner, also his son Patrick currently is our State Representative and was the Vice President of the City Council.

Yet another son, Jon Green, was President of the Warren Consolidated School Board of Directors. James’ wife, Mary Ellen, was an exemplary educator throughout her career as a teacher in the Warren School District.

The entire Green family has been a family devoted to public service and to the Residents of Warren.  James Green service to his country and community is unmatched, and will be greatly missed as he truly exemplifies the character and quality of our greatest generation!

He certainly would deserve a chapter in Tom Brokaw’s book “The Greatest Generation”.